Its been awhile since I have posted an actual fishing report. I've been busy and haven't had much luck when I have had the chance to fish. A few weeks ago I fished Denison dam and didn't even get a hit. I was suppose to go chase some tiger muskie in New Mexico last week, but the report was the fishing was not that good and there was an approaching cold front that would most likely make the already poor fishing even worse. I decided to not beat a dead horse and canceled the trip. Me and a buddy were suppose to go to Broken Bow this weekend, but that also got canceled because he had some stuff come up. I decided to stay in town and head out to my parents and fish for the morning. The fishing was slow and only a handful of bass landed. Justin joined me and we had a good time despite the lack of fish caught. The bass were just picking the fly up and slowly swimming off with the fly so bite detection was a little difficult, especially as the mid morning winds picked up. 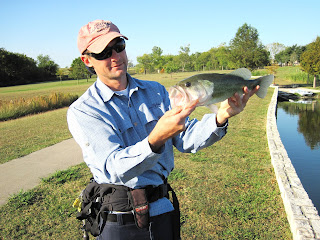 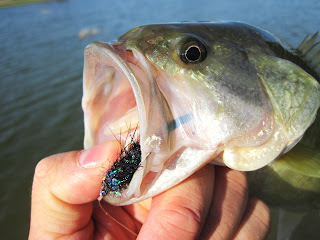