Scott and I went to Arkansas this weekend in search of a "unicorn". Not the unicorn that resembles a white horse with a large, pointed, spiraling horn projecting from its forehead. But one of a golden brown color with red and black spots and more importantly exceeding 30 inches. Our plan was to fish with Steve Dally and float down the river throwing large streamers to the bank in hopes of capturing one of these mythical fish. However the COE decided not to run any water this weekend and that quickly put an end to our intentions. With no water being released into the river for the past few days it was rather low and "boney" as Steve would call it. The float produced several stockers that fell victim to egg and midge patterns. It was awfully cold all day with lots of cloud cover and bone chilling winds. Steve treated us to a nice shore lunch that defiantly hit the spot. The next day was spent with Ben Levin and still with no water being released streamer fishing was not an option. We wade fished several spots and caught a lot of fish including one brown, but far from a unicorn. We caught several nice rainbows and learned a lot from Ben. Scott and I really enjoyed fishing with both these guys and hopefully we can fish with them again.

Steve pointing out some fish to Scott 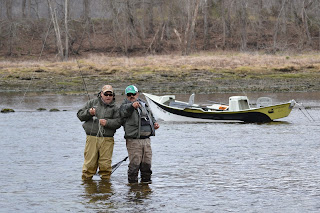 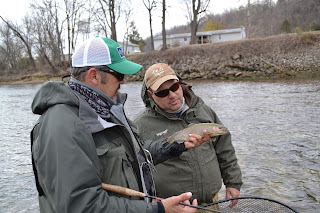 Only brown of the trip 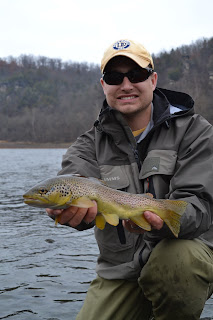 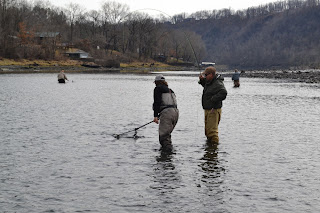