Typically when the red buds are blooming the sandies are running up the creeks to spawn. White bass are early spring spawners. Schools of males migrate upstream to spawning areas as much as a month before females. There is no nest preparation. Spawning occurs either near the surface, or in mid-water. Running water with a gravel or rock substrate is preferred. If creeks aren't moving fast enough, whites will spawn over wind swept, rocky points where wave action mimics flowing water. Females rise to the surface and several males crowd around as the eggs and sperm are released. Large females sometimes release nearly a million small eggs during the spawning season. The eggs will sink to the bottom and become attached to rocks, hatching in 2-3 days. Newly hatched fry migrate downstream toward the reservoir, joining together in schools to seek food and protection.They feed on microorganism, advancing to insect larvae as they grow. By midsummer, they’re eating small shad and minnows. Shad continue to make up a large part of the diet as white bass mature into adults. In Texas,white bass typically grow to 8-9 inches in their first year.They seldom live more than five years or weigh more than 3.5 pounds.The state record, caught in 1977, weighed 5 pounds, 9 ounces and measured 20.75 inches.


You’ll know when the white bass run is on by the pink blooms on red bud trees
and the cars and trucks lining the roadsides at river crossings. 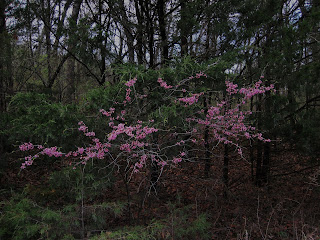 One of the many sand bass caught this morning. 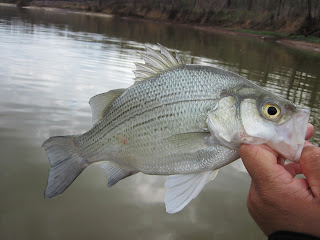