So what species is one most likely to catch offshore in the Gulf Of Mexico on a fly rod. You never really know what you are going to catch while offshore dredging with a heavy sink tips. It could be king mackerel, jack crevalle, red snapper, amberjack, bonito, dorado, sharks, blackfin or even yellowfin tuna and the list goes on. There is such a variety of fish you never know, and that is one of the things I like most about going offshore. We'll describe some of the more common species and a little bit about them below.

Jack Crevalle
One of the great fighters. This fish will eat anything and likes to run in schools. When they are on the hunt they move fast. They are very competitive so once a fly lands in the middle of the school they will be fighting each other to get to it. These fish can be found anywhere, in the bay, at the jetties, the surf or offshore on oil rigs and shrimp boats. After their initial run they typically go deep and the fight becomes vertical. They use there broad body to turn sideways and will fight to the end. 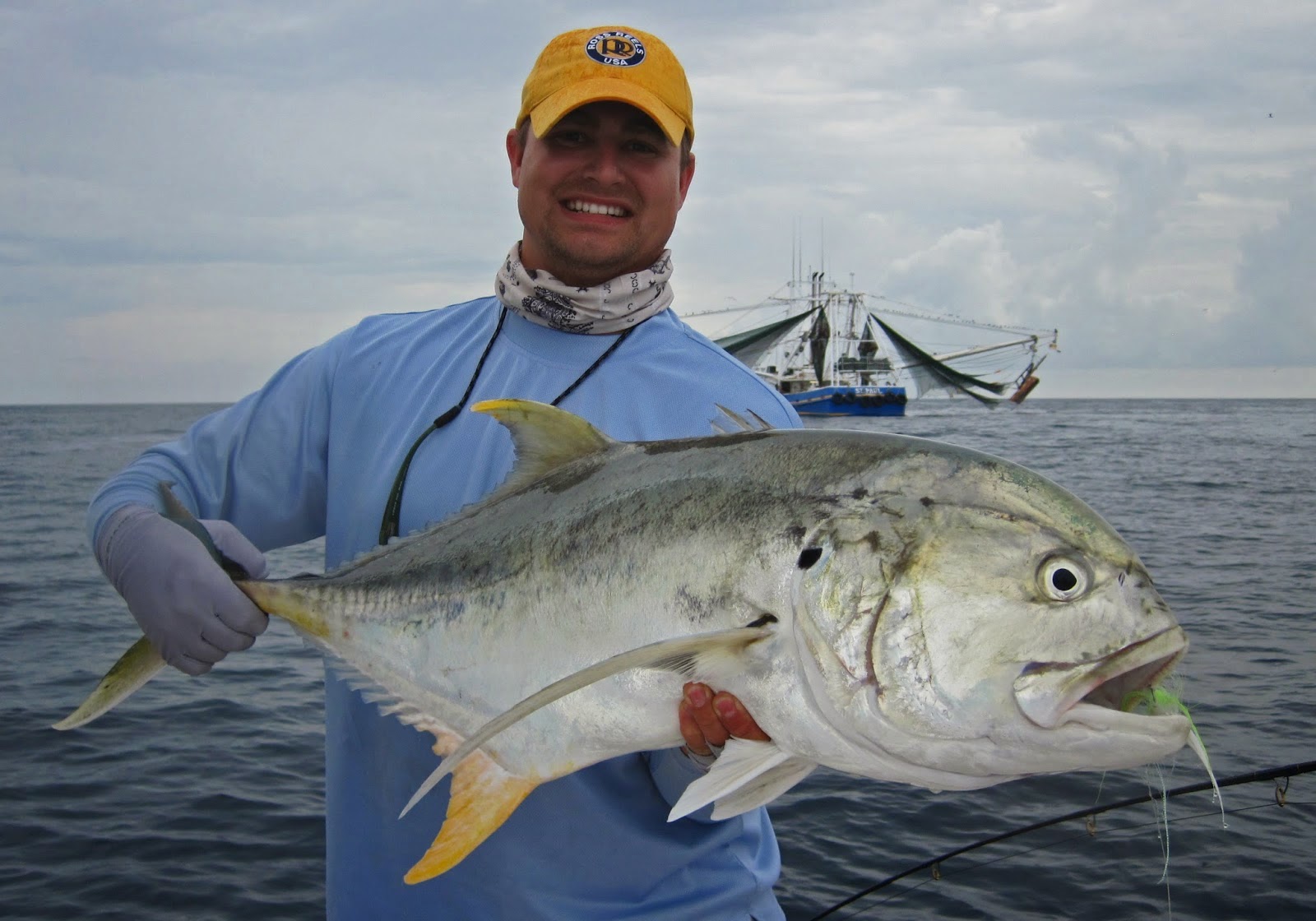 Bonito
Even though these fish don't get to big, they are a lot of fun with medium size gear. A 7-9 weight rod is perfect for these little 5-10 lb fish that could be referred to as blue lighting. They are fast and will fill the air with the sound every fly fisherman loves, a fly reel being lite up. 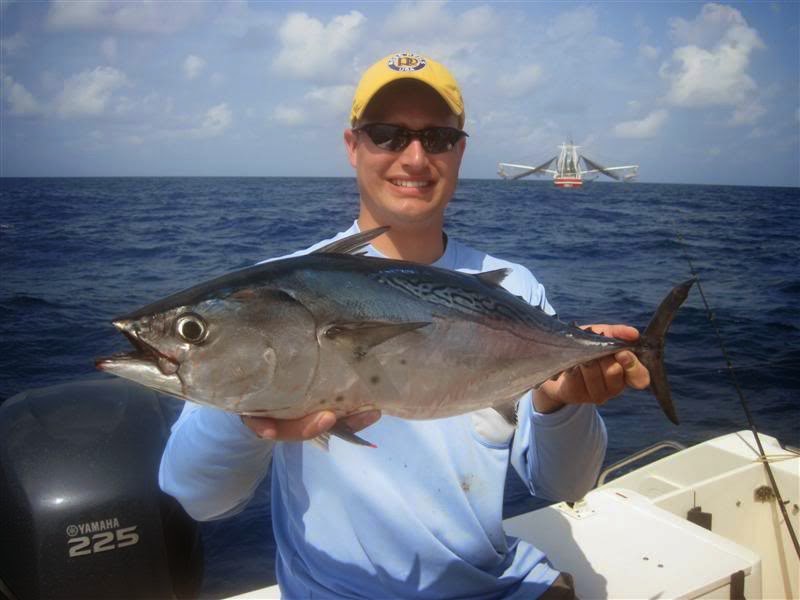 King Mackerel
One of my favorite fish. Not to sure really what it is about this fish but I have always liked them. These fish are built like torpedo's and are one of the fastest fish in the ocean. They don't put up the best fight, they are kinda like a sprinter, they will have one good burst on the initial hook up but then after that they come in pretty easily. These can be caught off the jetties but typically you need to be in a boat to catch them. They seem to really respond well to chum slicks and can be chummed to the boat. keep your fly in the chum slick and hold onto your rod. As Capt Chip says, a bone fish will pick up your fly then accelerate to 30mph. A King will hit your fly at 30 files an hour and keep going. 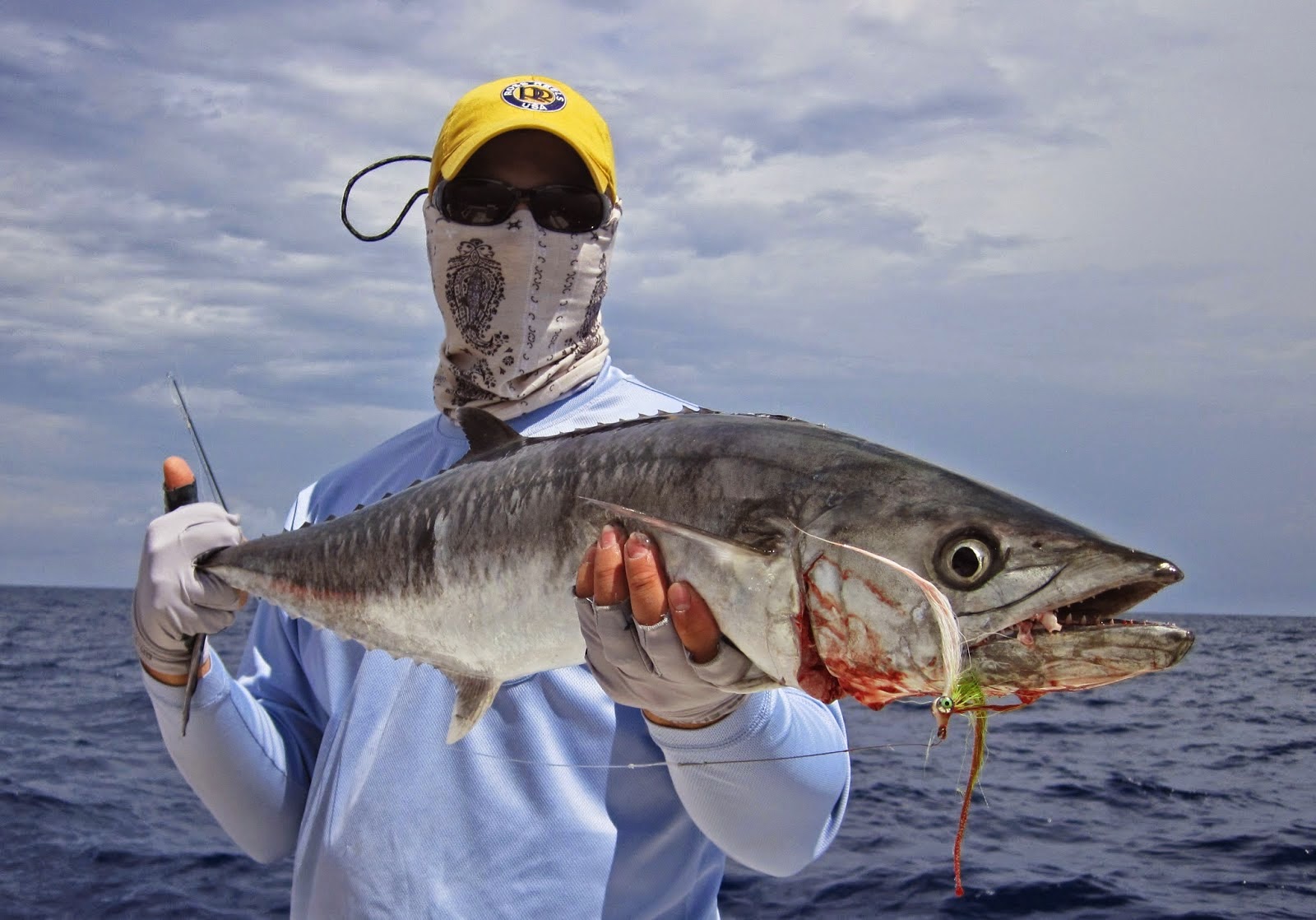 Red snapper
Probably the best eating fish there is. Also a complete pesk. These are probably the most predominate species we catch. They fight great, but catching 5-10 red snapper cast after cast gets boring after a little bit. Great fish, great fight and you should never complain about catching a fish, but when you are looking for something bigger and these fish keep taking your fly when your hoping for something else. We'll you get the point. 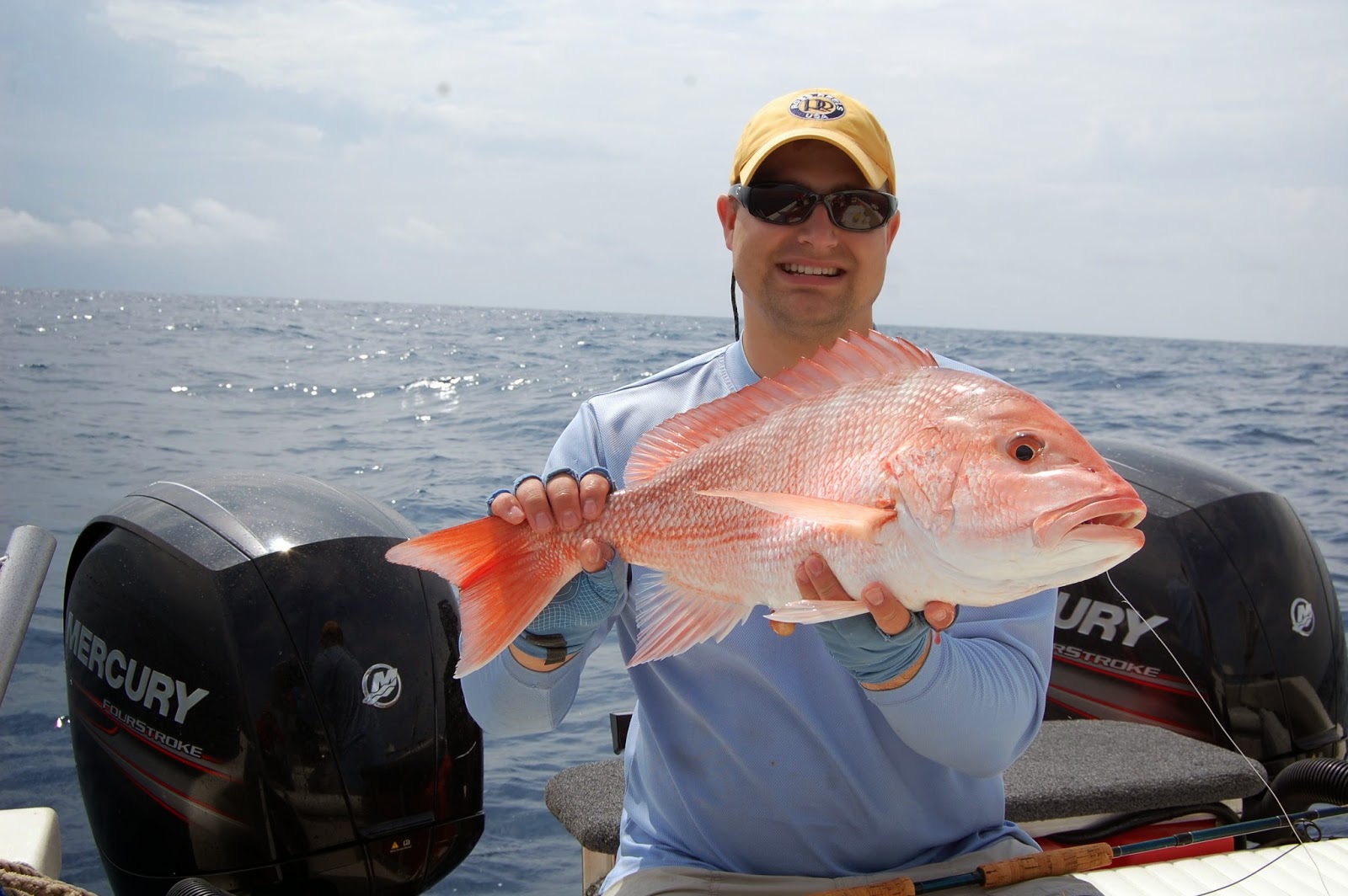 Dorado
Mahi mahi, dolphin, dodos are a few names these fish go by. They are the most colorful fish in the ocean. They fight good, they jump a lot and a very good to eat. We have caught some chicken dolphin on our trips but have yet to hook into a big bull dorado. These are one of the fastest going fish and are also very short lived. They typically can be found around weed beds and other floating debris. 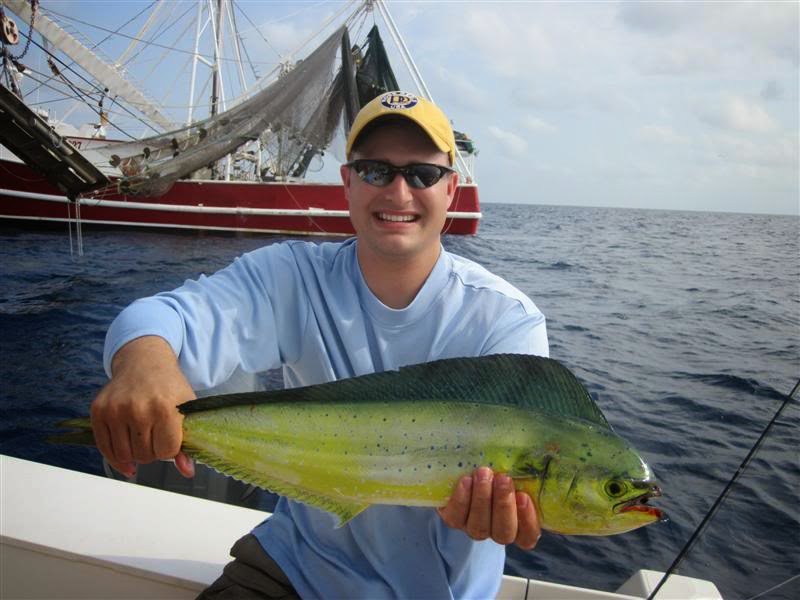 Amberjack
The AJ, defiantly a fish that ranks up there with one of all time favorites. This fish can get big and are not called reef donkeys for nothing. Typically they stay deep and around underwater structure like reefs, wrecks and rocks. They are incredibly strong and do everything they can to take you into the wrecks or rocks to break you off. Like Leonidas from the movie 300 says; " Give them nothing but take from them everything!" If you want to land these fish, that's the attitude your going to have to have. 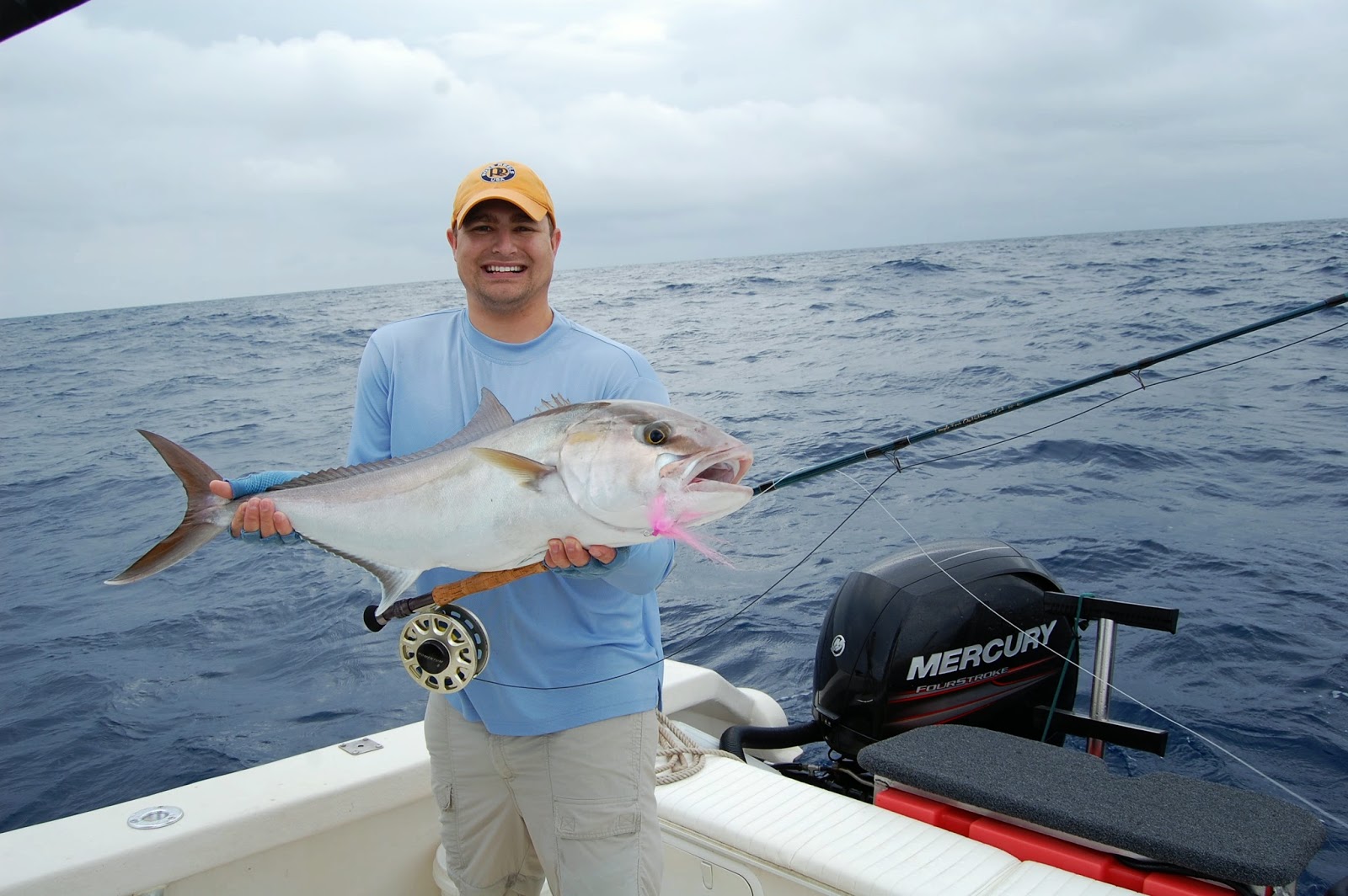 There is a number of other species offshore like blackfin and yellowfin tuna, which I hope to put a trip together out of Venice La for next year. There's also cobia which we have caught on bait but had a hard time getting them to take flies, even though I know they will. We've caught some smaller sharks on the fly, but I don't really care to tangle with them on the flyrod. Now if its a mako I'm all game, but blacktips and bull shark don't excite me that much. There's some sails and a few marlin in the Gulf but its not a place you really want to spend specifically targeting them.
Posted by Unknown at 11:06 PM