The sunfish family is probably the single most species of fish responsible for getting new anglers started in fishing. Sunfish, bream or panfish is a common collective name to refer to the many species that make up the sunfish family. Sunfish refers to a whole group of small fish that are pretty, plentiful and pugnacious. They aren’t the biggest fish but as they say it’s not the size of the fish in the fight that counts; it’s the size of the fight in the fish. Fishing for these guys is a ball on a slow fly rod like a TFO 3wt Finesse or your favorite glass rod. Sunfish are deep-bodied, which gives them a lot of surface area to leverage against the water during a fight and with their flat, slender bodies and fins they can accelerate and change direction quickly. The best thing about fishing for sunfish is you only need the most basic equipment. A 2, 3 or 4 weight fly rod is ideal, a click pawl reel and a standard weight forward floating line. Fly rods can be 6-9 foot because rarely will you be casting pass a few rod lengths. A medium to slow rod will be the most sporting and will allow these feisty fish to put a good bend into the cork of the rod. A very basic eight foot leader in 4x tipped with the most popular fly in the world a wooly bugger. Olive, black or brown wooly buggers in size 10-14 will catch gills all day long. Very rarely are these fish picky on flies and when you find a few dozen of them on their classic honey comb beds; it’s a rear occasion to not get a hit after two or three strips. Sunfish are found everywhere, from small creeks, neighborhood ponds, lakes, rivers and don’t pass up some of the small landscaping ponds found around shopping malls, banks and other suburban areas. Spawning from late spring to early fall these fish will populate any body of water they live in rather quickly. The best time to find the biggest females is the days leading up to the full moon. This is when they move up to spawn and can be target quiet easily on a fly rod. Typically these bigger fish will only be up in the shallows at night and at grey light. You’ll catch fish all day long on the beds but if you are looking for Bullgills, it is best to come back during the night to target these fish. Bullgills are the biggest of the bluegills and will break 10” and weigh over a pond. The current Texas state record bluegill is just over 2lbs and was caught in the Lampasas River in 1999. There are many private bass ponds where these fish are fed high protein pellets several times a day and for the private water record in Texas the current record is over 3lbs. I’m sure many have been caught even bigger but the bluegill in these ponds are meant to grow big bass and probably don’t get much consideration for anything else.


Loving to chase big Bullgills on the flyrod found myself this morning well before daylight at some of my local haunts. Making a quick recon trip earlier in the week to locate some beds and check water clarity from the almost daily rains I had located some fish and a plan was set. The simplicity of showing up to the waters edge and catching fish without having to think about what fly to use, what depth the fish are at and what presentation are the fish going to key in on today is what makes sunfish such a great change of pace. It wasn’t long before I had the first fish to hand, and for the remainder of the day the action never really let up. Sunfish and their various relatives are the gateway species that lead me into this great world of sport fishing; which at times could probably be referred to as more of an addiction than a hobby. And for that they I will always love these simply fish.


How many fish do you see? 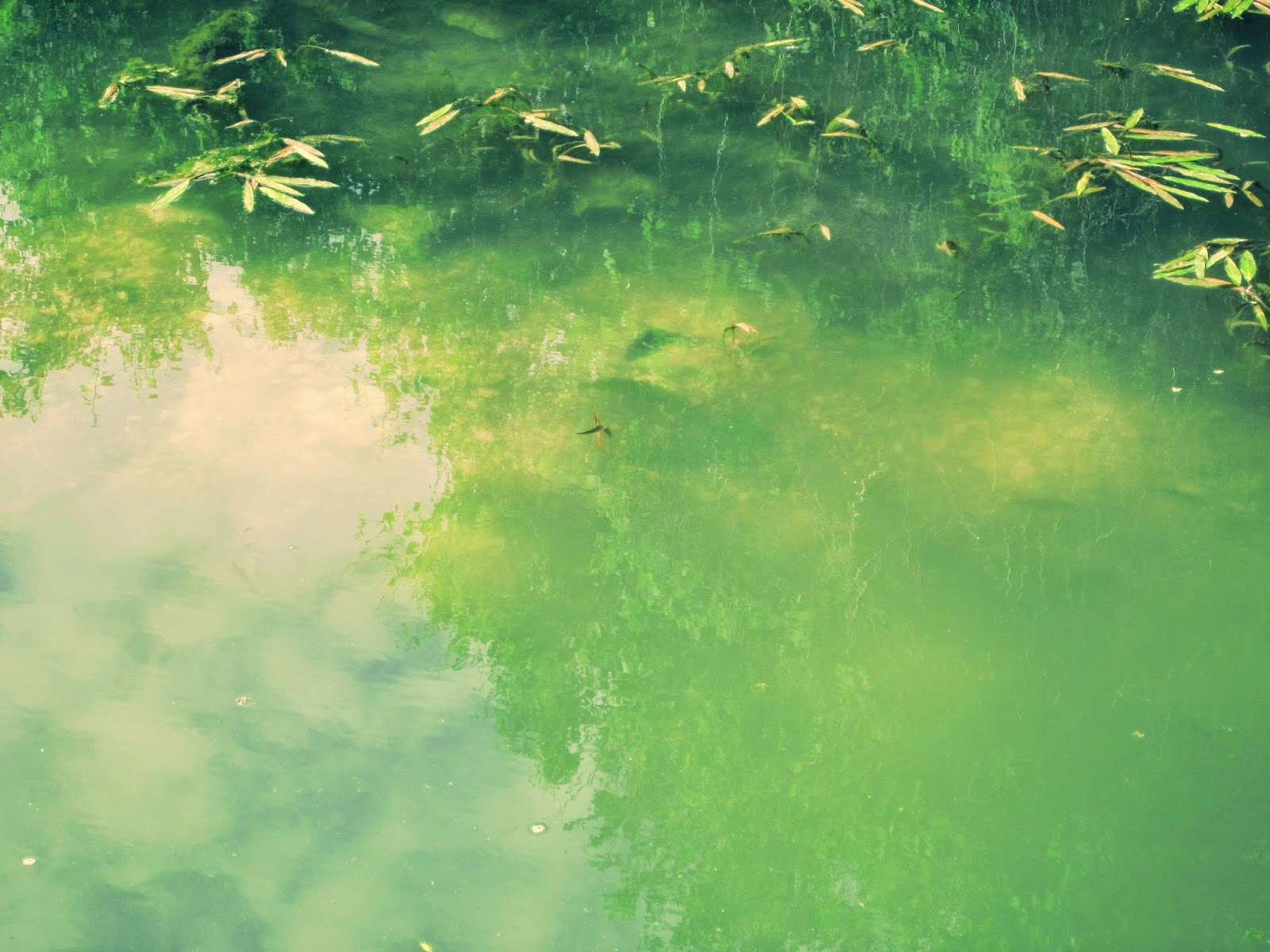 Night time is the right time for Bullgills. Longears are easily the prettiest of the
Sunfish family. 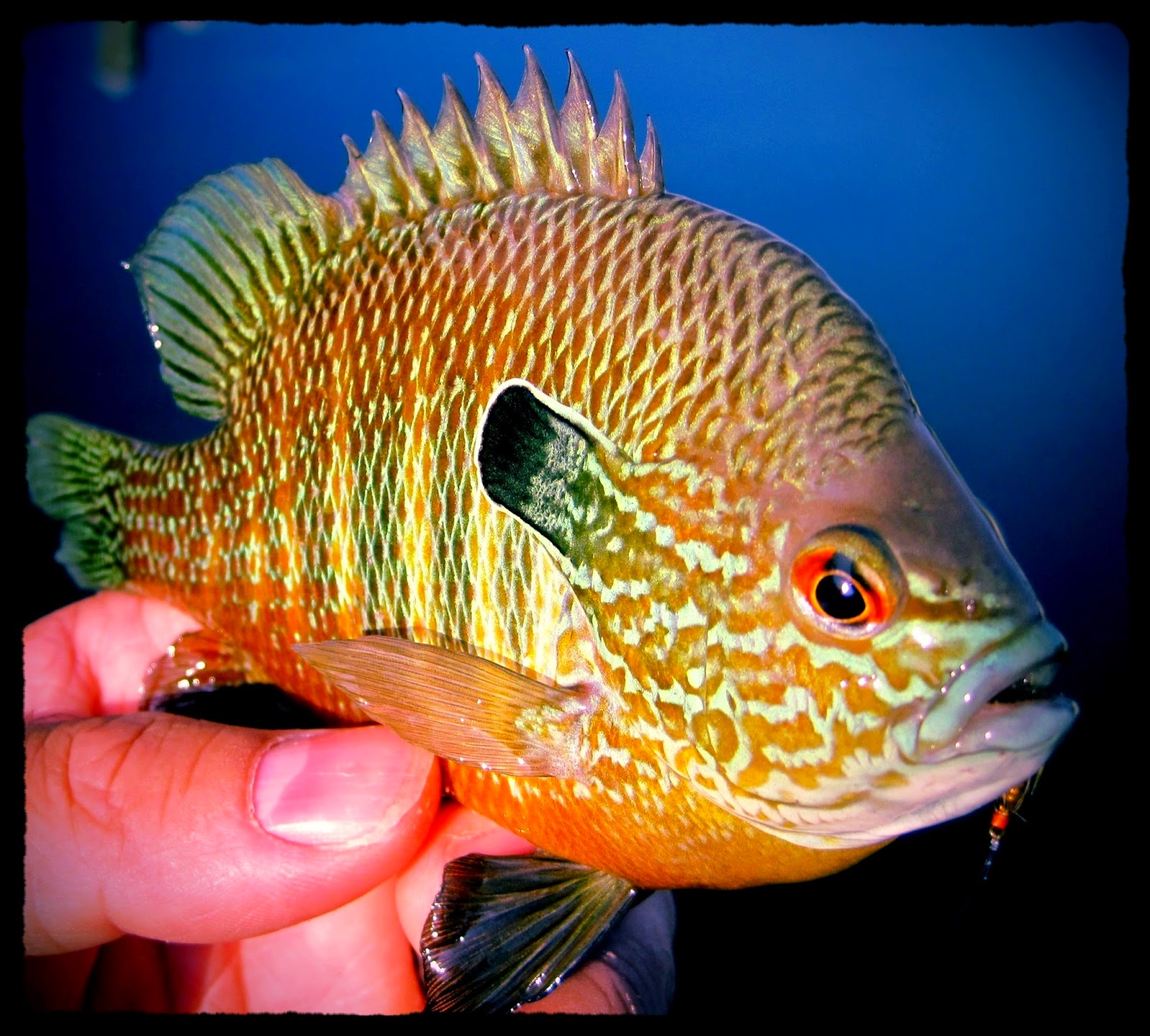 A few tips on locating beds is to look for them around old road beds, bridges and in corners of ponds. The fish typically like to spawn on gravel or rock. Flies can be as simply as a wooly bugger or as extreme as an articulated damsel fly nymph. A very simply and effective fly for sunfish is a wooly bugger without the hackle. Just take a size 10 or 12 hook, tie in a marabou tail and wrap the hook shank with chenille. The fish will generally be spawning in 1-2 feet of water so a slow sinking fly works best. If the fish aren't overly aggressive you can suspend the fly under an indicator and slowly twitch the fly to draw a strike. Another effective technique is to use a trailer fly. I like to use a small soft hackle fly in size 12-14 trailed a foot or so behind my primary fly.
Posted by Unknown at 11:45 AM