Man has it really been this long since my last post. Several trips have had to be postponed, rescheduled and cancelled due to the excessive rains and water levels on area lakes and rivers. I'll get more into that with another post probably at an end of the year.

Cooper lake is located in north east Texas. Some would deem it as the the best hybrid lake in Texas. The only problem is for the last several years the lake has been so low the boat ramps have been unusable. Fortunately that all changed this spring as the lake has risen close to 15 feet in the past few months. Just in the last 5 years the state has stocked over 500,000 thousand hybrids into Cooper. For whatever reasons unlike other area lakes Cooper does not get a lot of fishing pressure. When you can get on the lake the fishing can be great. I fished with Tony Parker several years ago on Lake Tawakoni who also guides on Lake Cooper.

This morning started at the Lake Cooper South Sulfur boat ramp. Per Tony the morning bite is normally not as consistent as the afternoon bite so we meet up a little later in the morning. After a short run from the ramp we stopped at an underwater hump. On the first drift across the hump I was hooked up with the first hybrid of the trip. Fish were boiling shad around the boat and the next few drifts resulted in several hits but no hook ups. We decided to give that spot a rest and went and checked out several more humps through out the lake. The fishing today ended up being pretty tough. Tony worked hard to put some fish in the boat, the fish just either weren't where they were suppose to be or the fish would show up on the graph and then be gone in a flash. I don't know if fish like consistency or not, but I know fishing guides do. This spring has been anything but consistent. With lake levels raising exceptionally fast then falling as the Corp Of Engineers bring the lakes back to pool every day has brought changing conditions. 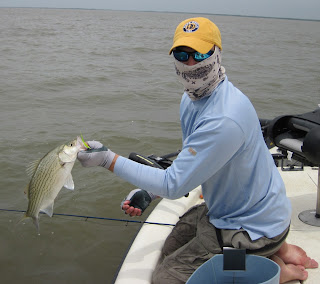 Hybrids being half striper and and half white bass fight hard and do exceptionally well in the warmer waters in Texas. In fact typically the action heats up through out the day. A 7 weight with a 250 grain weight shooting head is perfect for these fish. Hybrids like any color that is chartreuse. Clousers, deceivers, and other bait fish patterns 3-4 inches. Hybrids have relatively small mouths so don't go to large on the fly or hook size. When the fish are schooling and feeding they will pretty much hit anything that crosses their path. When they are not actively feeding and laying on the bottom they can be difficult to catch with the long rod. One technique is to let your fly and sinking line sink to the bottom and drag your fly across the bottom occasionally striping it. Theis technique will result in a lot of lost flies to snags on the bottom and the bites will be very light so strip set on anything you think might be a fish.