Not sure where to begin the story about day 2. The night was mild, not nearly as cool as I thought it was going to be. I guess that was a good thing since my sleeping bag and all my clothes were wet from a leaking waterproof bag. Note to self, double check your bags for any holes or tears that may have happened during the pre-trip packing phase. We only had to go a few miles to reach camp for the second night which was camp # 22 Boulder Garden. Needless to say it didn't take long for us to realize that the high water was limiting our fishing time and pushing us down river much faster than we anticipated. Within just a few hours we where passing by the designated camp. Robert and I decided to go ahead and push through the Gorge and take out a day early. The rapids were getting gnarly many strong class III and IV and frankly they were pretty intimidating. All the research I had done about the Gorge everyone kept saying the only rapid we really needed to worry about was the one called Cable. On the map Cable is rated as a class IV, needless to say the anxiety was building as we approached this rapid. We skirted, lined and even at one point unpacked the raft and carried it over a set of boulders to avoid some rapids like Boulder Garden, S-Turn and The Drops. When we approached Cable we scouted it on the right hand side, there was no way around it and we knew we couldn't safely run it but had no other choice. Not sure how Cable got its name, maybe because its like there is an imaginary cable running across the river just waiting to clothes line you. Before we even had a chance Cable through us like a rag doll. I don't remember much after that, I remember coming up from under water and watching my glasses flutter away. I was on the upstream side of the raft trying to hang onto the side handle, Robert was hanging onto the front handle on the raft. The raft was upside down and at one point I tried to climb on top of the raft. With a paddle in one hand and heavy wading boots I didn't make it to far. The current was still strong and pushed us through 3 more sets of Class III rapids which I don't even really remember. I know Robert and I were in shock and panicking, with several times I had to tell my self to consciously breath. It was tough because we couldn't abandon the raft and head to shore since it was our only way out and we still had several miles to go before reaching the take out. We were pretty much in the heart of the Gorge and the banks were very steep, the water was deep, cold and the current was swift. I don't really know how long it took us, probably not nearly as long as it felt but we finally got the raft and our selves to the bank and out of the water. The sun was beating down on some black granite boulders that were retaining some heat for us to rest and warm back up on. We had all the gear tied down good so the only things we lost was a paddle, sunglasses and hats. The rods were stored in some PVC rod tubes that I had made. The good news was that was the last of the rapids and we were pretty much home free. I don't know if this was a nearly lost my life moment or not. It wasn't like we got sucked into an undertow or anything. I will say I have been in a lot of pucker situations over the years in the outdoors but always felt I still had control of the situation. This situation was completely different, it was the most helpless I had ever felt in the outdoors. Absolutely no control and at the mercy of God and it could have been a lot worse than it ended up being. We exited the Gorge and had a few files to the take out. Those last few miles were some of the best water we had seen on the entire trip. Unfortunately we had passed a lot of it up. We were done and wanted out at that point. We did stop and fish some of it. and within just a few minutes we landed some nice browns. We got back to the take out, pulled the truck down to the river and haphazardly just started throwing stuff into the bed. I do know there wasn't anything we could have done differently and I don't know anyone else I would have rather had paddling with me than Robert.

The SOAR packed and ready for day 2. 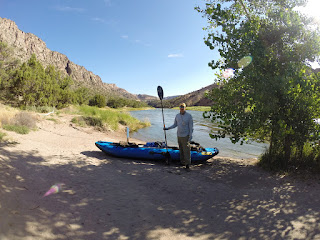 A nice brown on a streamer above Boulder Garden. 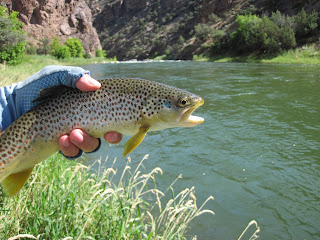 Can't remember was set of rapids this is.
Pictures don't do any justice. 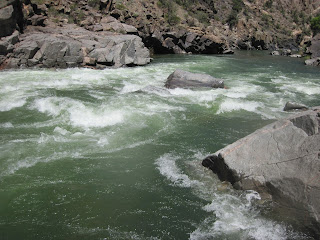 Robert with a nice Brown on the lower stretch. 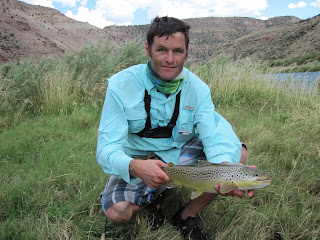 One of the fish I caught. 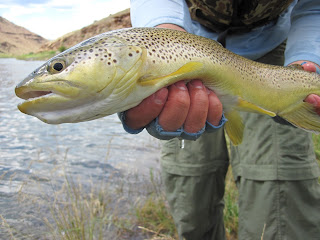 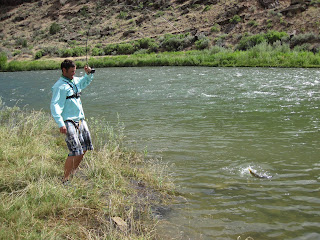 That concludes the Gunnison Gorge. 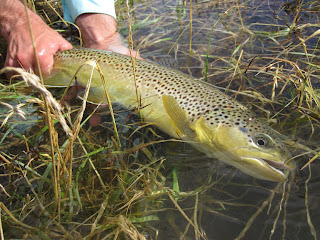