Being Hunted In The Slick

The Wife and I took a little vacation to San Diego this past week and I had the opportunity to go fish with Capt. David Trimble with On The Fly Charters. San Diego is one of the mako Sharks primary nursing grounds; juvenile sharks frequent the inner coastal waters during the warmer months of the summer. San Diego, Madagascar, and New Zealand are the only three locations on earth that are nursing grounds for makos. Mako Sharks have a 2 year reproductive cycle and a gestation period of 1 year. They breed from late winter to mid spring with the eggs being fertilized internally and develop inside the mother shark. Females bear live young (known as pups). The pups are fully developed and are around 2' long when born. The pups are known to be cannibalistic inside the womb and will feed on the smaller less developed pups. Mako sharks are highly migratory and are known to travel great distances in a short amount of time. They can be found at great depths feeding on swordfish and squid or cruising up near the surface looking for mackerel and bonito. Their a magnificent predator.

Makos are one of the more popular sharks for sport fisherman due to their agility, speed, aggression and their spectacular ability to jump to exceptional heights once hooked. Fishing for makos is unlike any other type of fishing were a fisherman is out looking for their prey, with makos you are the prey. The morning started with me meeting Capt. Trimble at the marina and loading the boat with ice, drinks and food for both the sharks and us. We motored out of the marina and took a short boat ride to the first location, still within sight of land. Capt. Trimble likes to look at a variety of indicators to determine prime locations to setup. these indicators include current lines, water temperature, underwater structure, and past success. Once we got all the chum buckets out we patiently waited, swapping fish stories to pass the time. This type of fishing is very much a hurry up and wait game, unless you get lucky and park right down on a shark. We bobbed around for about an hour before the first mako showed up. Due to the overcast that morning the visibility was limited and the mako was right on top of us before we knew it. He gnawed on the chum bucket a few times and then his attention was directed towards a seagull sitting in the slick. He went to pesture the seagull and gave him a few bumps but never took a swipe at the sea rat. The cool thing about this type of fishing is that it is very laid back. Once the shark is in the slick he is not going anywhere unless a bigger shark shows up. So we sized up the shark and grabbed the rod that matched it and Capt. Trimble handed me a 10 weight. A few cast and the shark took the fly and with a strong strip set I was connected with my first mako shark. Being the apex predator these sharks are, they are not use to anything getting away from them nor do they run from anything. So the mako just kind of sat there shaking his head trying to figure out what was going on. And when he wasn't able to shake the fly loose he busted into a run that took me into the backing very quickly and made a few jumps trying to get that annoying orange thing that he had mistaken for a meal out of the corner of his mouth. The mako put up a great fight and when we got him to the side of the boat, we took some pics and popped the hook loose to send him on his way. We continued our drift for about another 45 minutes and Capt. Trimble called for a move. Another short ride to the second drift. We bobbed around for about an hour when Capt. Trimble jumped to his feet when he saw a grey shadow cruising across our slick, he called out a sunfish. I have only seen pictures of an ocean sunfish. They are very strange fish and I wish we where just a little closer to get a good look at him along with some pics. About 45 minutes later we see a shadow coming right up the slick towards the boat at a quick pace. This time its a mako and he was at the edge of the boat before we could get a rod ready. This shark was more interested in the stainless steel prop and took several swipes at it. Capt. Trimble raised the motor out of the water. The mako was still not all that interested in the fly, so Capt. Trimble grabbed one of his teaser rods loaded with a mackerel and tossed it into the slick. After a few tries of bait and switch the mako grabbed the fly. Another great fight with a lot more jumps from this shark. Before we could get the shark to the boat and released we had another mako in the slick. This continued the rest of the afternoon, at times we had multiple sharks in the slick. At this point I had caught several sharks and Capt. Trimble asked if I wanted to try something different. I said sure and Trimble pulls out a Cam Sigler popper. I thought to myself, how awesome is this going to be to catch makos on a popper. It didn't take long for me to hook up as I was in aww watching a mouth full of teeth engulf the pink Cam Sigler popper. I ended the day with 6 or 7 maybe 8 makos to the boat and when we left to head back to the marina we still had several sharks in the slick. Capt. Trimble called one of his other Captains over who was running a charter and they were able to pic up were we left off. Within minutes they were hooked up to a shark. I got a lot of great video from the go pro and will get it all edited and put into a clip in the next few weeks and get up on the blog as soon as possible.

Unfortunately the worlds affinity for shark fin soup and the meat of the mako has lead to a decrease in population numbers. Worldwide the mako is not only subject to over harvesting by direct fishing, but even more so are often the by-catch victims of commercial fishing including longlining and gill nets. Please practice catch and release with the use of barbless hooks.

For more information on fishing the Capt. David Trimble, Please check out his website. 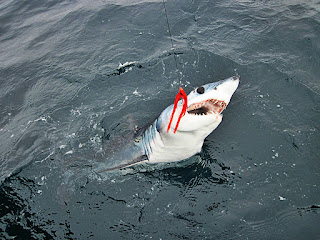 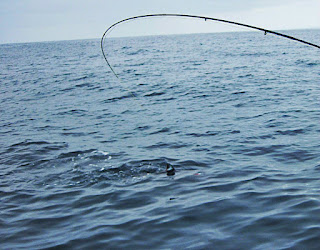 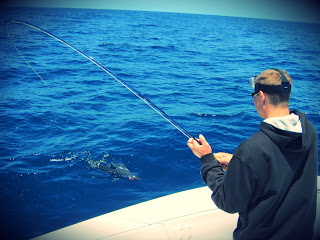 Lots of bait in the slick. 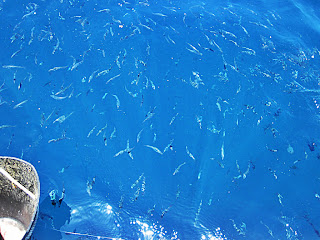 Mako on a Cam Sigler 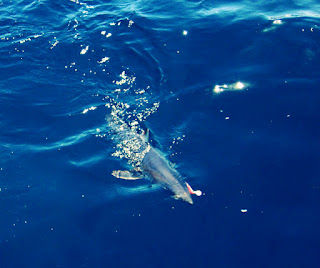