Fished the river this morning. The fishing was good and I caught a lot of small striper and some decent sandbass on a crease fly. I like the hard body crease flies like the Rainy's Taco Pescado, they hold up a lot better than your standard foam crease fly. There was a ton of small striper in the river and I think they pushed the smallmouth out because I didn't catch any smallies today. Later in the afternoon I found a hole holding a lot of gar. I didn't come prepared for them and will need to tie up some "Gar Flies" for the next time I go after them. I had a lot of them hit my clouser and after a few head shakes they were off. I did get one hook to stick. It was a lot of fun watching the gar come up and hit the fly, looking forward to chasing them some more this summer. There where some monsters coming up and rolling around the kayak. 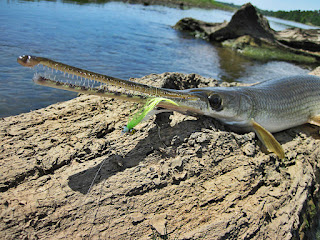