Tilapia are prolific spawners. Under ideal conditions, tilapia will spawn every 18-21 days, nearly twice as frequently as bluegill, generally considered reproductive factories in their own right. What's more, tilapia adults guard their eggs and young, a technique called "mouth-brooding." This added parental protection represents a significant competitive advantage in a pond, where everything is vulnerable to being eaten by something bigger and faster. The combination of frequent, multiple spawning efforts and parental protection typically translates into a bunch of food for bass. Tilapia may be safely stocked, without worry of cold weather mortality, by mid-spring. This will vary somewhat according to your location, but once water temperatures are consistently in the 60's it is safe to stock tilapia. Tilapia are mainly plankton feeders, collecting plankton by filter feeding. They are also known to eat algae and some types of aquatic weeds. In fact, they are frequently used to control the growth of watermeal, a floating aquatic weed in the duckweed family. Given their feeding habits, they present no potential harm, through competition, to the bluegill and bass populations in sport fish ponds. In addition, tilapia are raised on commercial fish food and, once stocked, will continue to eat pellet feed. A pond owner could control their food supply, providing enough feed to ensure that they are healthy and spawn frequently. A common concern when introducing exotic or non-traditional forage species in ponds is that the new species will overpopulate and "take over." Fortunately, the tilapia has a built in mechanism which absolutely eliminates such concerns: tilapia are tropical and will not survive the water temperatures of a temperate climate. Tilapia can survive and have become naturalized in central to south Florida. When water temperatures reach to mid- to low 50's, however, tilapia begin dying. When this occurs, the large adults are typically the only tilapia which will be observed dead at the surface. Over the next few weeks, as water temperatures gradually decline, nearly all of the juvenile tilapia which have been produced during the preceding growing season - hundreds of pounds per acre - will be consumed by predators. Talk about a feeding frenzy!


This is the second year we have stocked tilapia in our pond. 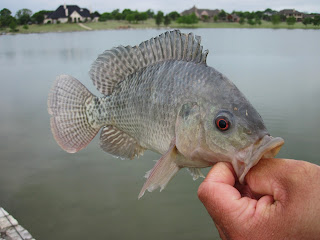 A nice 4lb post spawn bass. This fish should be closer to 6 after a month of feeding on tilapia.
I saw this bass cruising down the bank and sight casted to it, she ate an olive wooly bugger. 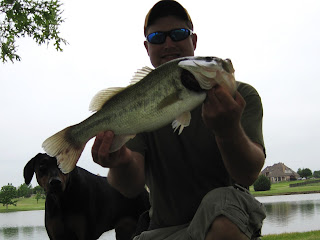