Bluegills begin spawning when water temperatures reach about 70°F. Spawning typically peaks in May and June, but will continue until water temperatures cool in the fall. Nests are created in shallow water, one to two feet in depth and typically gravel substrate is preferred. Fifty or more nests may be crowded into a small area, thus creating a spawning bed that looks like a giant honey comb. 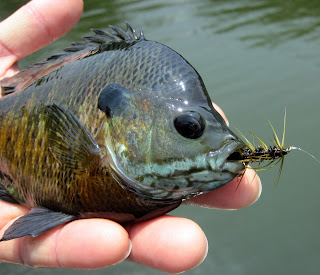 I always like to use two flies, the first fly is a olive wooly bugger followed by a soft hackle like a red ass in a size 12-14 or 16. A lot of times if the fish isn't overly aggressive they will follow the wooly bugger and then turn and hit the soft hackle. Its also fun when you catch 2 fish at a time. 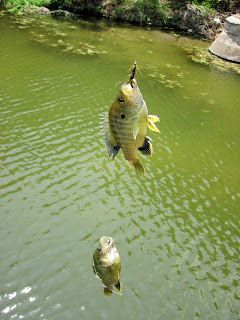 The best times to target bluegill is the week leading into the full moon. The fishing can be great anytime of the day, even in the middle of the day like today. I have found that the biggest of the bluegill, Gillzilla's, will move up onto the beds the evening or two before the full moon with the last hour of light and into the night can be very good. 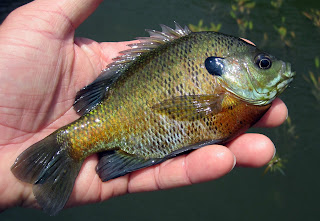