I sneaked off for a few hours this morning before everyone woke up. I loaded up the kayak and headed to a local creek by the house. This creek is loaded up with quality gills and bass. It didn't take long for me to hook up with the first fish of the morning a nice bluegill. The bluegill was pulled off the edge of a thick clump of hydrilla and fell victim to a size 14 olive woolly bugger. I continued drifting in the kayak as the slight breeze  pushed me down the shoreline. I was catching fish fairly often as I worked my way up toward a bridge that crossed the creek. As I glanced into the water I could see a huge nest of gills that was covered in bull gills as the kayak glided over the nest the fish spooked and bolted to deeper water. I backed the kayak out of there and anchored it up about 20 feet from the edge of the nest. The gills quickly returned to protect the nest and that they did. For the next 30 minutes they smashed the woolly bugger within seconds of it hitting the water. It was an awesome morning on the water that came to an end to soon, but needed to get back to get Fathers Day started with the family. 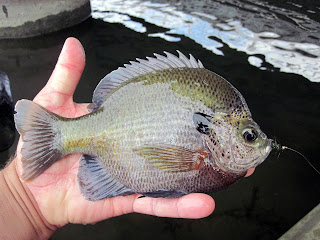 First fish of the morning 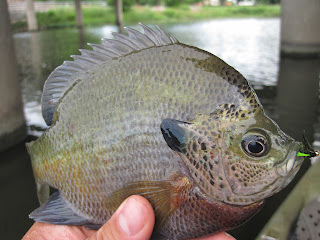