Where It All Began

I was probably 10 years old when I bought a 5wt Cortland rod and reel combo at Dallas Sports; it came with a Cortland graphite rod, a Rimfly reel spooled with Cortland line and backing. After watching the little instructional video that came with the package and getting everything put together I was soon practicing my casting in the backyard swimming pool. Soon after I made my way down to a little creek that ran behind our house. Knowing of a hole that held a lot of sunfish I rigged the rod with a small yellow Betts Sneaky Pete and eased my way up to the edge of the creek. It only took one cast and the second they fly hit the water a sunfish hit the popper, lifting back to set the hook the fly came flying back without hooking the sunfish. Completely disappointed but not letting that distract me from my desire to land my first fish on a fly, a quick cast back into the rippling water and the fly was eaten again. This time I was hooked up to my first fish, the feisty green sunfish put up a great fight and was soon brought to hand. I wish I had a picture of that fish to show yall but no pictures were taken that day.

I went back to the same creek today and a lot has changed. Most of the deep holes have been silted in and no longer hold the fish they once held. I found lots of small green sunfish and caught a few but ended up moving on after about an hour due to the lack of fish and getting eaten up by mosquito's.

A double on some small longers. 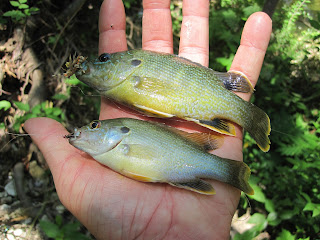 I drove to the little creek I have been fishing lately and it was on fire. I caught some nice longears and copper nose bluegill. Also got a great creek bass on a hopper. 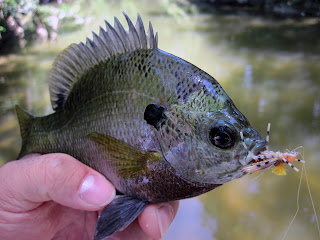 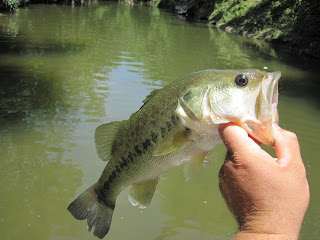 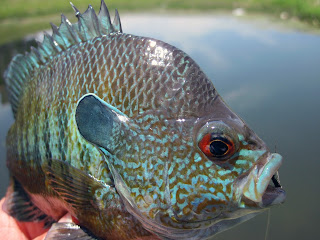